Still extensive use of obsolete pesticides 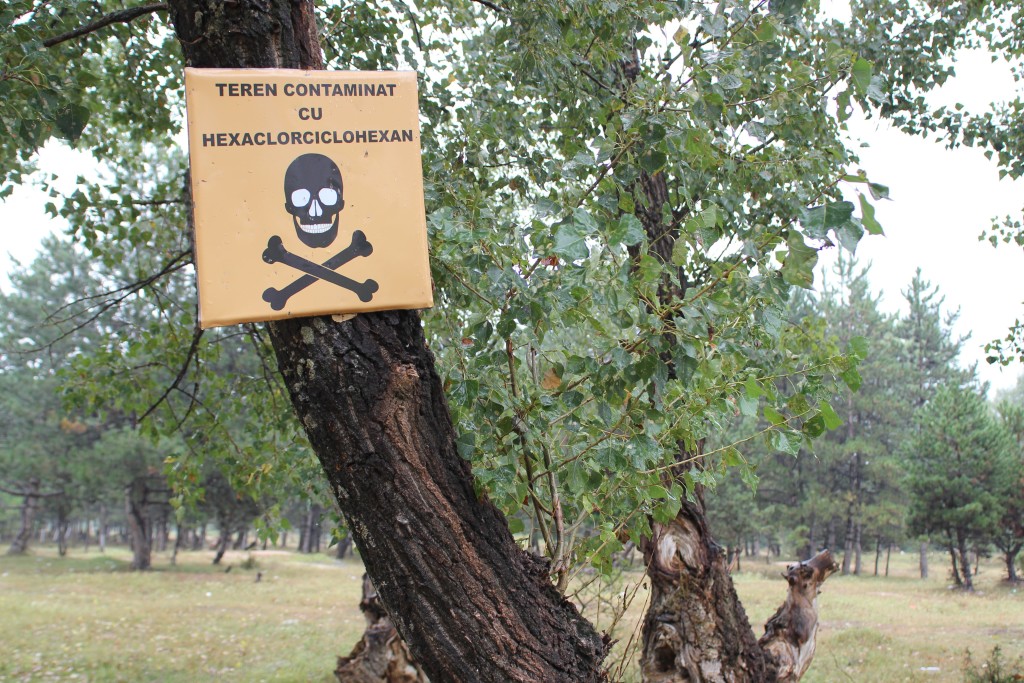 Obsolete pesticide can be found all over Romania – either on former communist’s Agricultural Cooperative Production Units or in people’s backyards.

200 contaminated sites and about 2.000 prospective contaminated areas exits’ in Romania, according to a government release in mid-August 2015. The cost of de-contamination is approximated to 8,5 billion euros.

Land and livestock grabbed by the regime

Between 1949 and 1962 a massive campaign run by the communist regime aimed to centralize the Romanian agricultural system. The result was the creation of the Agricultural Cooperative Production Units by grabbing land and livestock’s from peoples’ property and move it under the state coordination of the local communist party member. More than 96% of agricultural land was taken by the state, which then started the modernization of the agriculture.

As a result Romania built large factories to produce pesticides. One of the largest was in the city of Turda, in the heart of Transylvania just 40 km away from Cluj – Napoca.

It was also here in Turda that they – back in 1913 – produced the poisoned nerve gas that was first used at the battle of Ypres in the World War I.

Between 1954-1983 the plants manufactured DDT. The pollution here is on an impressive scale with dozens of tones of DDT and HCH.

DDT has been found in all the crops and milk here and even destroyed the whole export production of dairy production of Napolact, the regional dairy in 2001.

The problem with pesticides in Cluj County was debated in 2003 in the Romanian parliament. Similar chemical plants were built all over Romania and the problems are identical with the ones in Turda. In Turda there was an idea to store the pesticides into salty mine galleries with no success.

However, there are at least seven places nearby the city where HCH has been deposited. One of places has been discovered when a new highway has been built. The decision was at that time to relocate the HCH into a hill located in the vicinity of the highway, just 2,5 km away from the original place. Here a small plant for neutralizing the HCH has been built with EU funds. The costs were about 4 million euros. A similar place is located in the city of Turda – in a place called Posta Rat. Beneath a local recreational area on the Aries riverbanks hundreds of tones of HCH were deposited decades ago.

Locals are barbecuing there in spite of the warning signs mentioning the contaminated area and the persisting smell. Almost anyone in the region have heard about an illegal trade some locals were performing with he obsolete HCH. Poor people dug out the HCH and sold it across the country as DDT for the potato cultures. Others sold it as rat poison because it proved to be very effective. When visited the area we asked the locals for the price of a 20 kg bag of HCH: “It is not allowed to dig for it here. If caught, we may face prison”, said a guy in his mid 50s. However, when talking further he was willing to sell me 20 kg of HCH for 12 euros but not on the spot. He needed to dig it up during the night.

Clean up before EU membership

When the Agricultural Cooperative Production Units were dismantled in the early 1990s locals have stolen everything from there – including pesticides – and kept it at their own backyard. Some used them in the agriculture others (being afraid of authorities) just buried them or let them flow on rivers.

The obsolete pesticides – some even from the 1960s – are a huge problem for the Romanian authorities. Until 1989 all the Agricultural Cooperative Production Units received hundreds of tones of pesticides to increase production. Some of the agronomists used them intensively at the time others knowing the consequences reduced the quantity of pesticides on the fields and stored them and this is the reason why many storage units exists across the country.

In 2003 a Phare-project for elimination of these pesticides started in Romania.

Phare was a programme introduced and subsidised by the EU to applicant countries from Central and Eastern European countries.

According to the project three main centres were established to collect the pesticides: Giurgiu (50 km south of Bucharest), Oradea (western Romania) and Suceava (northern Romania). Between 2002-2005 there were 2,500 tones of pesticides collected for destruction in Germany. The estimated cost to neutralize one kg of pesticide is 1,5 -2 euro.

In 2014 the Romanian Food and Veterinary Office completed a report on pesticides in Romania. National legislation has been approved according to European Commission Directive 2009/128/EC but some of the implementing legislation has not been put in place as yet. Destroying the POP’s was one of the conditions for Romania to join EU.

According to Mihaela Vasilescu from “Medium et Sanitas” Association the POP’s identified in stockpiles with obsolete pesticides is Toxaphene, Heptachlor and DDT and are spread all over the country with some regions having no clear data. According to her report in 1985 the use of DDT and HCH was banned for agricultural use in Romania having 14,794,000 hectares for agriculture. The report has been issued in the mid 1990s and according to it there is no transparency on POP’s.

Lindane (commercial name of HCH) and DDT was still allowed in public health, there is no inventory of pollution sources of POP’s and there are no systematic studies on this issue.

However, according to the same report there are no data regarding health-related pesticide residues in human and animals.

In 2016 this free movement of waste will affect Romania but there are no public awareness campaigns on this issue or on POP’s especially in the rural area. Here local people still use the obsolete pesticides with no safety measures.