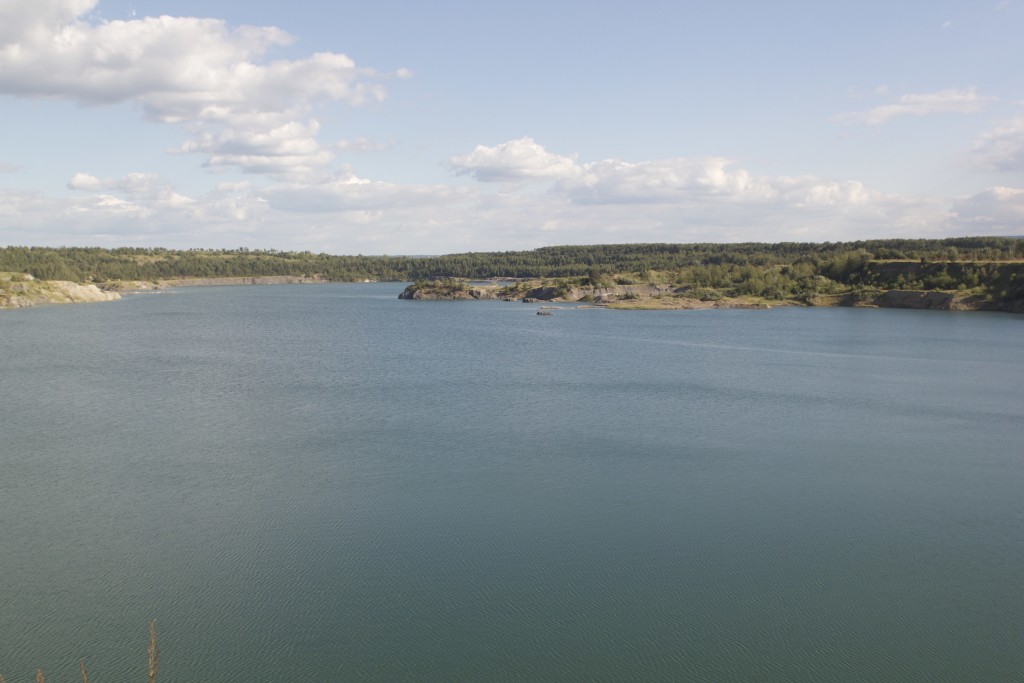 Between the city of Kalush and the chemical productions area we find the Dombrovski open-cast mine.

Since 1967, large amount of potash (Potassium Carbonate) was extracted here. The potash were used in the production of agricultural fertilizer, but due to a bankruptcy, the production stopped in 2001.

Since then – no one seems to care much about the mine.

Nowadays the mine is flooded with water as salty as in the Dead Sea between Israel and Jordan.

But the Dead Sea of Kalush also contains an unknown amount of mixed chemical waste from the different production sites in Kalush. After production at the mine stopped, trucks dumped chemical waste straight into the mine. Very few – maybe none – knows exactly what kind of chemicals that were dumped:

“The development of the pit as industrial object started in 1965. First survey works had begun 10 years prior to that, in the 1950s. The first test pit was small and had dimensions 20 x 20 meters. Later it was enlarged up to 100 x 100 meters. Its depth was 30 meters. It was flooded several times. Though the pit was actually small the impact of floods was observable in the residential areas. Drinking water wells got clogged despite the fact that the pit was much smaller than the one we have today”, says Yuri Sadoviy, head of the Kalush Gallurgy Institute. Mykhailo Dovbenchuk, former chemist at one of the chemical plants and today he heads the local NGO, Green Movement Karparty, explains how it happends:

“Lots of wastes were produced in the chemical plants. They were taken away from the production grounds and stored in worked-out area of the open pit. From time to time the accumulated wastes were overlaid with overburden rocks, excavated and carted away. They were a mixture of various soils containing salts and production waste, mostly chemical ones, with some amount of hexachlorobenzene. The precise figure remains unknown as it lies at 50-70-meter depth. Also no one knows how it can interact with brines, what compounds will be generated. No one has ever conducted a single research of the potential chemical reactions. In the same way it remains unknown how it can spread beyond this city. It is a hazardous condition for the environment and health of the local population”, says Mykhailo Dovbenchuk.

Out of sight – out of mind

When Kalush was named an “emergency disaster zone” in 2010, mainly due to the previous dumping of hexachlorobenzene (HCB), the UN and EU quickly conducted a mission to get a clear view on the risk.

The investigation came up with some alarming information regarding the abandoned open-cast mine.

One of them that required urgent attention was: “A breakthrough of the Dombrovski open-cast mine into the Sivka River is considered to be a very likely event, with serious consequences if no corrective/preventive measures are taken.”

In other words: If the “walls” of the Dombrovski open-cast mine falls or erodes under heavy rainfalls, it will severely contaminate the nearby Sivka river. The river is not big, but drains into the mighty Dniester river.

Here it passes through Moldova before it drains into the Black Sea.

On the way to the Black Sea, the river Dniester support parts of Ukraine and approximately 80% of Moldova with drinking water. Worst case scenario is therefore that 10 million people will lose their water supply.

Since the EU/UN report were published, no “corrective/preventive measures” have been taken. On the contrary, the open-cast mine has turned into a mighty lake. Studying photographs from 2010 and 2015, documents that the water level in the mine has risen dramatically. 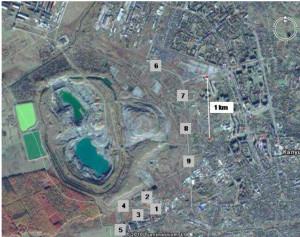 Dombrovski open-cast mine, as it appears in the UN/EU-report from 2010.

This image from Google Earth shows Dombrovski open-cast mine, as it looks when contaminated Future was there in July 2015.

From an open pit mine to a deadly lake

A year after the fact finding mission conducted by the UN and EU, a large group of national and international experts met for a roundtable discussion in 2011.

Among numerous warnings, one sticks out:

“Dombrovski Open-Cast Mine filled up with 12-15 Mio m3 brine and dangers of slope failure, karstification, subsidence and non-functioning drainage system and possibility of break-through into the Sivka river with serious consequences”.

At the deepest end of the lake it exceeds 100 meter. Millions of cubic meters of salty, undrinkable water and now slowly but surely under threat of collapse.

Furthermore the lake has been used for dumping of chemical waste during time.

How much and what kind of chemical waste, is still questions unanswered.